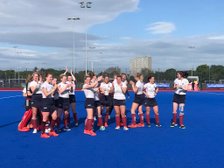 Following their Premiership league success, the L1s weren’t quite done yet. After beating Western Wildcats 6-2 in the semi-final back in early April they now had their first Scottish Women’s Cup final and a chance for more silverware. A dominant season aside, the final was guaranteed to be a tough test for our L1s, where they were to face Edinburgh University. Although the season’s results would have put the odds slightly in favour of the team in maroon (or on this occasion, white), there was no way Edinburgh University were not going to make it a real battle, and the last time the teams met being a 2-2 draw will have given them some hope. But in order to be the best you have to beat the best. A tasty derby game was on the cards.

The excitement across the club had been steadily building and come Sunday, the sun shining, everyone knew they were about to witness something special. Now, when is a home game not a home game? The answer, when it is at Peffermill. The stands were full and both teams had plenty of ‘12th’ men and women ready to cheer them on. Head Coach Keith Smith and David Knipe had done all they could to prepare the squad for their final outing of the 2021/22 season, it was over to Captain Bethan Mann to lead the players out and for them to show everyone what they were made of.

What ensued was a tense, and at times for the fans, a difficult to watch match. For the neutrals, they wouldn’t have been able to take their eyes off it, it was the pinnacle of Scottish Women’s hockey and a worthy cup final. The squad were put under consistent pressure from a hungry Edinburgh University side and had to do more defending than I’m sure they would have liked. Everyone was working hard across the pitch, but ultimately it was the contributions of two key players that sealed the game. After a first quarter of no scoring and in the dying minutes of the second quarter when it looked like game would have to be decided in the second half, something spectacular happened, Emily Dark happened. Emily took the game by the scruff of the neck, carrying the ball from deep in the Watsonian half, all the way to the opposition D, leaving red shirts in her wake. Cutting across to the left of the goal there was no way Emily wasn’t going to make this count, she sent the ball soaring into the net at the near post. Stunning. I’ve lost count how many times I’ve watched that goal back, it does not get old. Do yourselves a favour, save this link and remember the name Emily Dark. The hooter blew for half time and Watsonians went into the break 1-0. A slender lead, but one that would ultimately hold thanks to the undefeatable Lucy Camlin in goal who made some crucial saves, putting her body on the line for the win. The crowd cried out the final countdown – 3, 2, 1!

At last, the chance to celebrate, breathe, reflect. Did that just happen? Where were you when Watsonian L1s sealed the double at the first time of asking?

Well done to every player and coach. Thank you to the opposition, umpires, supporters, our sponsor Ondine and Scottish Hockey for making it the event that it was.

What a way for this President to sign off, thank you and see you at the end of season bar.
Over and out, Catie.